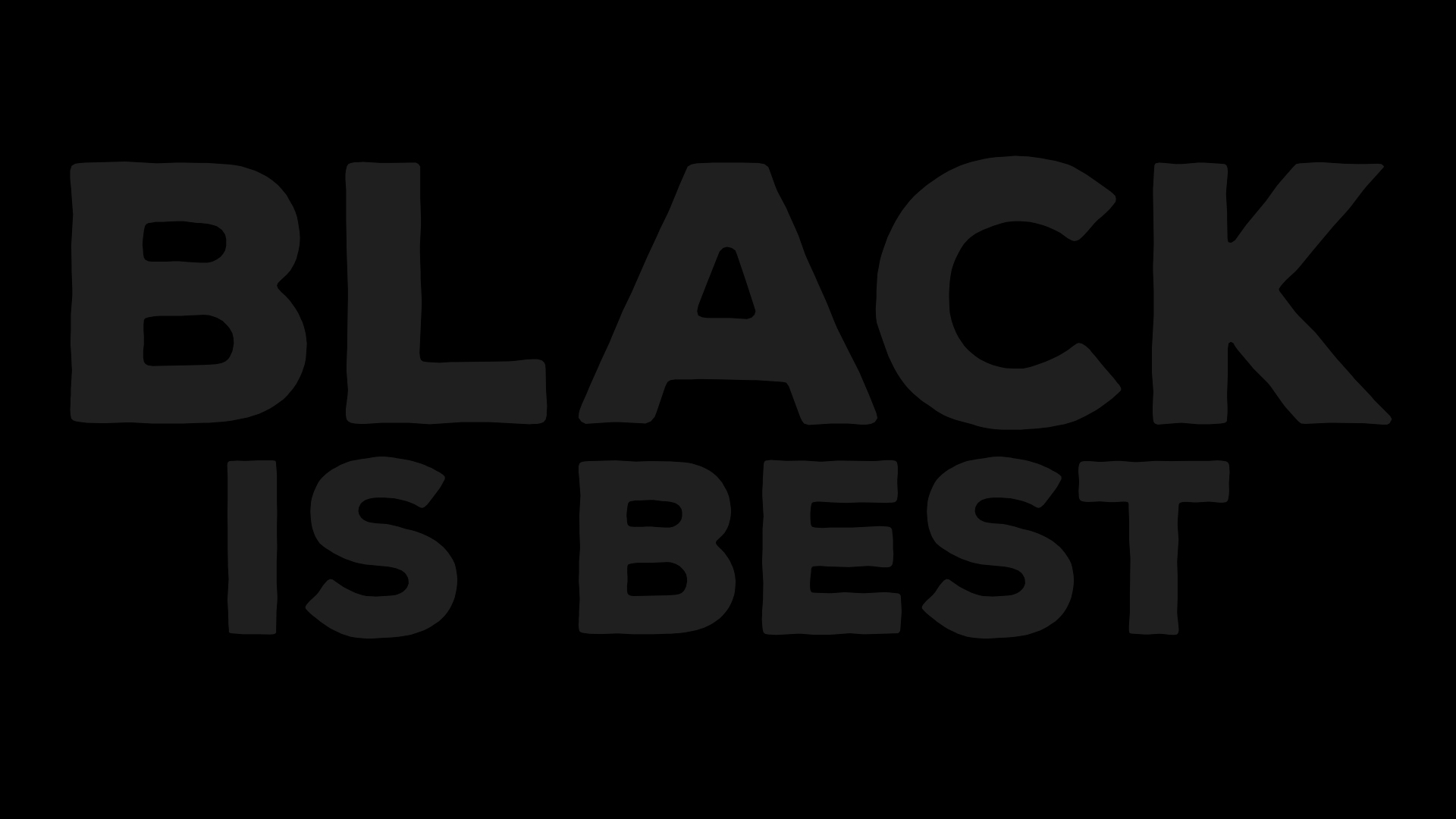 Black is the Best Color – A Photographic Argument.

Evolution, adaptation, survival of the fittest – all that stuff takes some time to show up in our genetic code. We didn’t lose our Sasquatch level of body hair overnight and we sure didn’t suddenly stop needing our wisdom teeth a century ago. These things happen gradually. That said, it’s interesting to see how the ramifications of some genetic throwbacks are still prevalent today.

Goose bumps don’t actually do much for you when you’re cold, but if your body was covered in a shag carpet, the tightening of your follicles would make each hair stand on end, creating a fluffy, insulating barrier between you and the elements. Goose bumps when you’re scared? The same effect also makes you look bigger (and hopefully scarier).

While a few of these outdated perks are physiological, a rather large number of them are perceptual. Take “white light,” as an example. The Kelvin scale for color runs the spectrum (pun intended) from infrared to ultra violet. Each end of the scale falls out of the range of human perception, but we can see fringe colors. Embers in a fire or molten metal are near the infrared end, while a black light would be on the way to ultraviolet. But why is this the scale? More importantly, how did “white light” end up in the middle of the spectrum and why do we perceive it as “neutral?”

It was the only all-present source of light until the 1800s. It stands to reason that if, for 99.9% of our species’ existence, we have had a constant, never-changing “thing” that allowed us to see and navigate, that would become our standard and we would then base our perception of all other sources of light around that.

We all know black is slimming, it’s neutral, it goes with anything. More importantly, it’s the most basic level of any design.  It doesn’t matter if you’re talking about text or a logo, you always start from black.  On white paper it’s the most contrasting color.  When placed next to any other color, black makes that color seem a brighter and more vibrant by comparison.

If we’re speaking photographically, black allows shape, texture, and shading to exist.  Shadows – blackness – the absence of white creates a negative where there had previously been illumination.  If everything was always lit evenly we would never have a sense of depth.  The bright sides and shadow sides of the objects allow us to determine that they have dimensionality – that there’s depth to the object.

Speaking of depth – when referring to graphic design, photography, or any type of visual media, black can create fascinating optical illusions. Genetically, we’re predisposed to view darker values as further away and brighter values as closer. It might be a survival throwback. When we were hunter-gatherers, light was safer. It’s harder for a saber tooth tiger to sneak up on you during the day. At night, they can see what we can’t. The bright, shining eyes, staring at us from the shadows, were the first warning something’s wrong. When there is an encompassing absence of color or brightness, anything light immediately stands out. If we bring this into modern times, we see the effects everywhere. Neon signs or anything glowing in the dark draws our attention. Without the blackness to cause contrast, we wouldn’t take note of what’s bright.

It even shows up in our vision when we need to focus. Pick a specific spot near you. Stare at it. Keep staring. Don’t look away. That spot is the bear, staring you down in the woods 10,000 years ago. If you look away, you’re a grizzly snack. Keep staring. What’s happening? You’re beginning to lose the detail in your peripheral vision. Everything is getting darker. Your brain is swapping out non-essential information with black, so you can stay focused on that bear.

Photographers intentionally use black, not just to contrast brightness, but to remove light. You can use a white fill card to add more light to shadows, but you can also use a black fill card to add shadows. It’s like adding negative light.

By decreasing the brightness of a portion of a face or object, it draws more attention to the still-illuminated portions and can make them seem closer to the viewer. This is the same technique used in contouring, with regard to makeup. Adding highlights to an upper cheek and shadows to a lower cheek create the illusion that the cheekbones stick out further than they naturally do.

Let’s talks separation. Black’s separating abilities have been famously used for millennia. Since humans began decorating themselves with jewelry, hair styles, and makeup, black has been used to negate attention to certain areas, while rerouting the attention to something adjacent. The most common examples are eyes. Whether it’s warriors who want enemies put off guard by a piercing stare, or individuals wishing to make their eyes appear larger through the use of eyeliner, black has been making those peepers pop since time immemorial.

Stage productions used this technique for centuries, but in the early 1900s, black’s separating capabilities started to help people forget the world’s problems and lose themselves in a movie. Those black bars do more than just deliver an ultra-widescreen experience.  They keep you tuned in to the action.

We’ll end with the big ones.

Black is how we perceive the furthest distance we can fathom. When we look up at night and see blackness between the stars, we’re looking into the past. It’s a distance so incomprehensibly far away, no discernible light has had time to travel from the stars to our eyes. By galactic standards, the blacker the sky, the longer it will take to get there. For our solar system and our existence on spaceship, Earth, black is the conclusion to “now” and the promise of “next.”

It’s the end of our day and the signal that tomorrow is coming.